Marilyn L. Marker, 80, of Mesa, Arizona, passed away on Friday October 11, 2019, at Dignity Health Arizona General Hospital in Mesa.  She was born on March 3, 1939 in Dumont, Iowa, daughter of Dick and Sophie Borneman Weichers.

Marilyn graduated from Dumont Community School. She married Delmar Richard and they had two daughters, Deb and Cindy.  After they were divorced and she married Albert Herrera, Jr. they also had two daughters, Toni and Jodi.  On December 7, 1979 she married Robert Marker and resided in Charles City, Iowa.  Marilyn worked many years for Mutual Federal Savings and Loan.  After retiring from there, she worked as an insurance agent selling Crop Hail Insurance.  She also worked at Dean’s Jewelers in Charles City.

In July, 2017 they moved to Mesa, Arizona residing in their new home in a retirement community.  She enjoyed going to the pool with family, going to potlucks, and visiting with friends.

Marilyn was an amazing and caring person. Everyone who met her was so lucky to have met such a beautiful, kind woman that would have done anything for the people she loved.  She will be dearly missed. 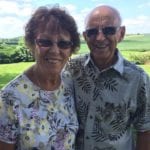